Brisighella’s territory, lying between the northern Apennines and the Romagna plain, and stretching up to the Tuscan border, hosts peculiar enviroments and landscapes with unique geological and naturalistic features.

From the plains around Faenza the road gently climbs to the hills, along the bleak ravines glistening in the summer sun, and eventually reaches the town of Brisighella, with its towering three rocky spurs. Along the countless paths, walks and ancient cart routes naturists and visitors can observe many different flowers, trees and animals, all peculiar of this unique land.

The Vein of Gypsum (Parco Regionale della Vena del Gesso Romagnola), It is the most spectacular feature of our territory, standing out against the sky like a mountain chain…

The low hilly terrain of western Romagna, set in a continuous strip from the Sillaro valley to the Ronco valley, is marked by a peculiar barren landscape, streaked with narrow valleys and sharp rocky ridges. These are the “calanchi”, a geological phenomenon due to the clayey terrain and to the atmosferic agents, most of all the washing action of the water. 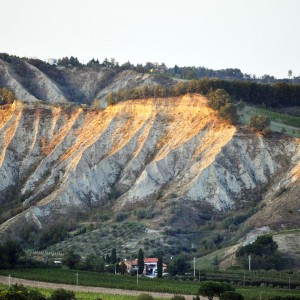 These rocks belong to the the Blue Clays period that can be dated between the Pliocene era and the Pleistocene era (5.3 to 1 millions years old), with a tickness of 1-2 km, amd it’s a very remarkable feature in the Brisighella landscape.

From a scientific perspective these terrains are mostly made up of sedimentary impermeable soils formed with microscopic particles, like dust, caused by the erosion of the rocks.

Due to their peculiar structure, these particles slowly soak up a large amount of water and change their phisical status, forming a mass of mud and the typical mussy outflows. On the contrary in the summertime water evaporates and the muddy clay shrinks creating deep cracks on the ground.