The Castle, the Clock Tower and the Monticino Church are the three distinguishing features which make Brisighella so well known. 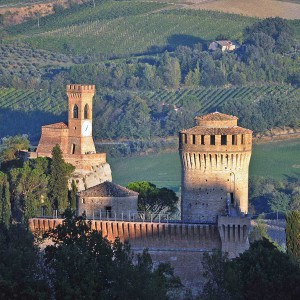 Built in 1310 by the Manfredi family (Lords of Faenza), was under their dominion upto 1500 ac when for three years only the Condottiere Cesare Borgia, son of the Pope Alessandro 6th, ruled over it.

From 1503 to 1509 it was ruled by the Republic of Venice who added the Great Tower and more defensive walls. It eventually ended up under the Lordship of the Vatican states.

The Castle has still the usual characteristics of medieval fortresses: chain holes for the drawbridge over the main entrance, shelves and slots, guards’ alleyway on the walls. 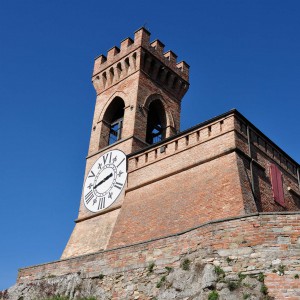 The tower was originally built by Maghinardo Pagani, with square blocks of chalk rock, to control the siege of the nearby Baccagnano Castle and until the 16th century it was part of the defensive structure of Brisighella.

Many times damaged and rebuilt, the Tower was totally rebuilt in 1850 when the clock, working on a six-hours system, was also added. 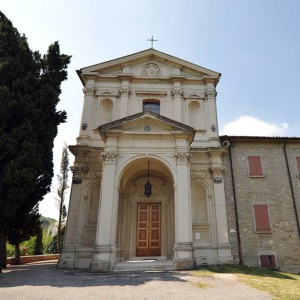 Here people worship a polychrome terra-cotta plaque made by un unknown artist, dated 1626; fist placed in a small tabernacle close to Porta Bonfante, in 1662 it was moved to a chapel over the hill (then called Monte Cozzolo o Calvario, probably due to its steep sides) where today is located the Sanctuary.

The present building was erected In 1758 and ever since went through several changes; in 1926 (third centenary of the holy Image) the facade was rebuilt, according to the project of architect Edoardo Collamarini.

The frescoes inside, by Savino Lega from Faenza, dated to 1854.

At the back of this sanctuary there is a cave from which chalk was mined; the cave it’s now an open-air geological museum.