It is the most spectacular feature of our territory, standing out against the sky like a mountain chain. The vein of gypsum (la “Vena del Gesso”) is one of the most remarkable features, from a geographical and geological point of view, of Romagna Apennines.

This formation of the terrain is called “Gypsum-sulfurous” (Messinian epoch, radiometric dating 6.5 – 5.5 millions years ago) and stretches from Piemonte to Sicily, but only here it makes the surface with such evidence. 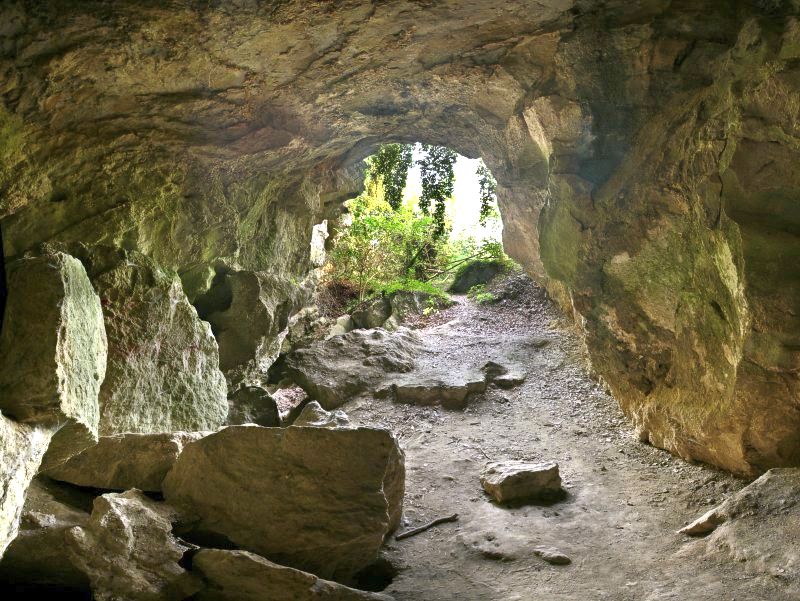 Like a jewel, this park is embedded among the rocks of Rontana and Castelnuovo and it’s one of the most evocative place in the hills surrounding Brisighella.

This park has been founded in 1971 by the Province of Ravenna and by the cities of Faenza and Brisighell, after the purchase of an abandoned estate, 20 km wide, partly woods and partly ex-arable land.

The Park presents a wavy landscape, with rocky outcrops, dolines, sinks and caves, covered with a mixed vegetation that is spontaneously going back to its original nature.

In this area there are many karst hollows, most of them of vertical structure, some still unexplored.

The Park pursues and supports the recovery of the original nature of the site, with the priority objective to protect and preserve the area.

The Park is also a perfect stage for educational activities, excursions and stays and a great opportunity to increase respect and care for nature.

There’s a great diversity between the Carnè Park (and the Gypsum Vein) and the surrounding Apennines, and can be easily spotted specially looking at the vegetation. 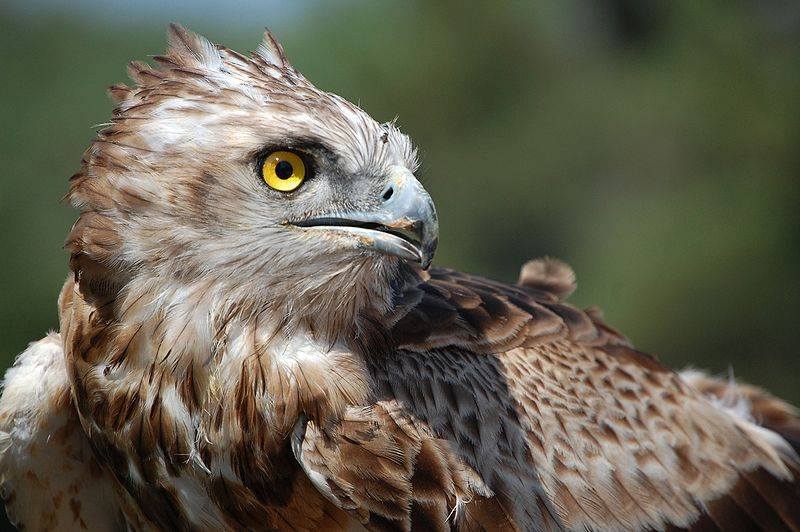 The chalky rock has unusual properties which have favoured the creation of a typical morphology, with a peculiar microclimate and flora. So we find on the South side plants which grow in warm or dry places, while in the North side plants that normaly canbe found only at higher altitudes.

Fauta too is rich with many different species. The chalky grounds creates natural enviroments with ideal conditions for many insects and coleoptera; the caves too host a quite interesting fauna from a biological perspective (e.g. Chiroptera) due to their adaptability to this habitat.

In the Park there’s also a great variety of amphibians, reptiles, birds and mammals among which is to be noticed the porcupine (Histryx Cristana). Other species living in the Park are the Niphargus (a small shellfish), the Triturus Carnifex (an amphibian), the Barn Owl, the Night Owl and several breeds of bats.

Important fossil remains of several five million years old vertebrates have also been found in the clayey layers. This museum is placed in the Gypsum Vein area, close to the Monticino Sancuary.

The recovery of this abandoned chalk mine offers to the visitors, thanks to a proper setup of the place and several didactical boards, a geological and naturalistic treasure, a well-known reference for international researchers.

In this special museum, opened from springtime 2006, one can observe beautiful geological frames and rocky outcrops, dating back millions years ago when the Apennine mountains surfaced from the sea.

The equipped paths allow a safe approach to the different rocky layers and an easy understanding of the changes of the enviroment.

It’s the highest peak in the Gypsum Vein (515 mt asl), with its unmistakable shape amongst the other hills of the River Sintria valley. 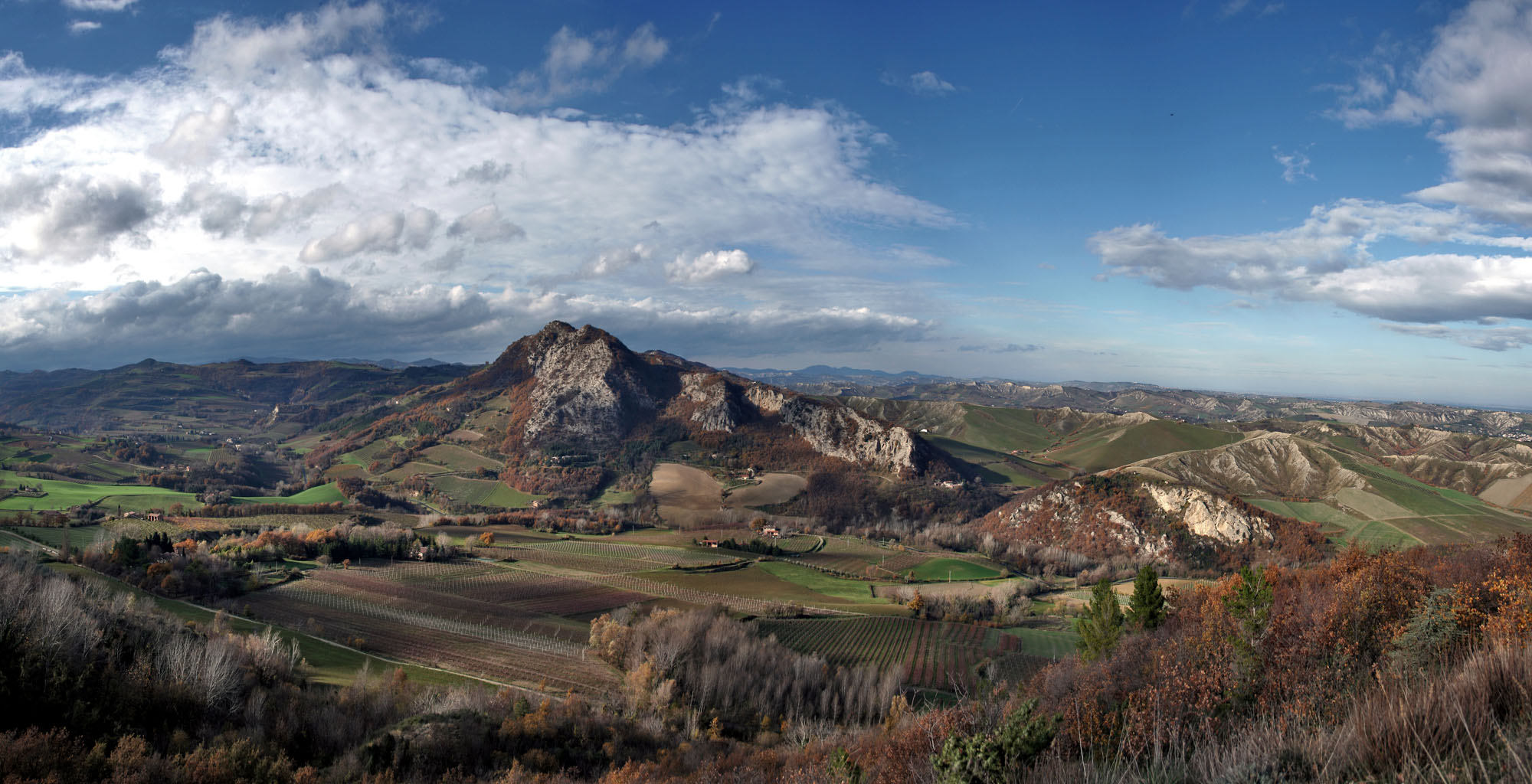 Here can be found some old ruins: the top of an ancient castle and an old church, the recently restored St. Mary in Tiberiaci, dating back to the Xth century.

Monte Mauro is an unique and evocative place, a preferred destination for many trekkers and lovers of nature, who like its recognizable shape, the steep sides, the caves and the karst hollows, the beautiful landscape from the top.

Many paths and tracks run through all the Gypsum Vein, allowing the visitors a close look to this untouched natural site.

The outcrop of the Gypsum vein stretches from the Sillaro valley to the Lamone valley, along the eastern side of Apennines, direction WNW-ENE, 1.5 km wide, about 170 mt thick.

Due to the high solubility of this kind of rock the whole area present several karst phenomena, on the surface and subterranean: dolines, sinks and caves, often of remarkable size.

The Gypsum vein is composed of the same ore (calcium sulfate dihydrate) and has a crystalline structure with a peculiar sparkling, hence the popular names of ‘Moon stone’ or ‘Selenite’.

How did it form?

The Gypsum-sulfurous formation can be compared to a wide fossil salt-mine deposited following the closure of the Gibraltar straight and the draining of the Mediterranean Sea..

The lack of water and the dry climate favoured the evaporation and the deposit of gypsum, a salt dissolved into the water; alternated influxes and defluxes of water caused the typical structure of alternating sediments of gypsum and marl.This process involved the entire Mediterranean area and took place for 15 or 16 times: every layer of the gypsum vein represent a sedimentary cycle.